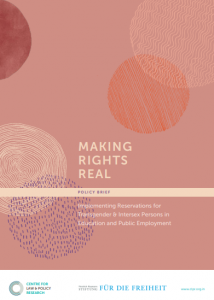 BENEFICIARIES OF THE RESERVATION

While NALSA guaranteed the right to self-identification of one’s gender as male, female or transgender, it did not lay down any method or self-identification protocol. Hence, medical procedures or hormone therapy should not be required as a pre-condition for any legal recognition or identity documents for transgender and intersex persons. Gender recognition procedures should be quick, accessible, transparent and based on self-determination. If a person requires a change in how their gender is recorded, their expression of intent should serve as the sole basis for such a change. Subsequently, the process of obtaining identity cards by transgender and intersex persons must be based only on self-identification.

HOW SHOULD RESERVATION FOR TRANSGENDER AND INTERSEX PERSONS BE IMPLEMENTED?

The Policy Brief outlines the categorical basis for reservation and the extent of reservation that must be provided.

TRANSGENDER AND INTERSEX PERSONS’ RESERVATIONS UNDER THE ‘TRANSGENDER’ CATEGORY

TRANSGENDER AND INTERSEX PERSONS’ RESERVATIONS UNDER THE ‘WOMAN’ CATEGORY

In Nangai v. Superintendent of Police, the Madras High Court held that: ‘treating the petitioner as not a female on the basis of medical declaration that she is a transsexual and forcing her to accept the said sexual identity will surely be an infringement of the rights of the petitioner guaranteed under Articles 14, 15, 16, 19(1)(a) and 21 of the Constitution of India.…….the petitioner was born as a female, recognised by the society as a female, she choose to identify herself as a female for all purposes. Therefore, I hold that she is a female in the legal parlance and thus, she is eligible for appointment as a Woman Police Constable.” Therefore, transgender persons who wish to identify only as ‘women’ and do not wish to avail reservation relying on their transgender identity card should be permitted to avail reservations under the distinct horizontal category of ‘woman’ that is currently in place.

EXTENT OF RESERVATIONS FOR TRANSGENDER AND INTERSEX PERSONS

The policy brief does not propose a definite extent of the reservation be provided by the States or the Central Government. Such a proposal must rest on a detailed and nation-wide empirical assessment of the size of the transgender and intersex population in India. The ‘transgender’ category be treated as a horizontal reservation, it will not breach the 50% limit set by the Supreme Court on the extent of vertical reservations.